Evaluation and treatment of infertility is usually NOT covered by insurance companies. Sometimes the evaluation/testing for infertility is covered. If so, this coverage is typically limited to testing done before treatment has begun. What this means is that certain patients, based on insurance coverage, may do the Fallopian tube test Before starting any treatments, like clomiphene or letrozole. Also, it means a semen analysis should be done before starting oral medicine to treat the problem. Without insurance coverage the x-ray test of the Fallopian tubes can cost between $1,000 and $1,500. The semen test runs about $100.

There are a range of infertility treatments, everything from special timing of intercourse, to pills, to more advanced treatments. Each step up in treatment takes more time, increases the cost of care, requires additional clinic visits and tests, and should result in higher pregnancy rates. Here we will limit the discussion to the diagnosis of unexplained infertility. This means that all tests have been normal but a couple is still not pregnant. This is different that treating a low sperm count OR treating blocked tubes.

What follows here is the list of interventions, from least to most. How to select the right intervention is discussed in the office with your OB/GYN.

Prior to Step I

Fertility starts with two people having intercourse. The woman should have regular, predictable, monthly periods. The couple should not use contraception, and should not use bottled lubrication. This should be penis in vagina sex, with ejaculation in the vagina. Sex should be every other day for the middle week of the cycle, or 2-3 times per week when the woman is not getting her period. The middle week of the cycle is Approximately 5 days after the period is over.

Clomiphene and letrozole are used to cause ovulation. Both medicines are used in the same way, although they act on the body differently. Each of these medicines is an antiestrogen in its own way. The antiestrogen effects of these medications “tricks” the body into making more estrogen. Estrogen is produced during the ovulation process. Logistically, each medicine is taken for 5 days in a row at a very specific time in the cycle. Intercourse must be timed to match the expected ovulation. There is no way to predict which medicine or dose will work better in a particular patient. Both clomiphene and letrozole have five dose levels, each. Twins are slightly more common with the pills.

The pills, clomiphene and letrozole, cue the body to prepare the egg for ovulation. The effect of the pills can be increased, if necessary, with an injectable hormone to trigger the egg to ovulate. The timing of this injection is VERY important. Intercourse then follows the shot. The benefits of the shot, ovulation, are accompanied by the introduction of two risks: OHSS and multiple gestation. OHSS (ovarian hyperstimulation syndrome) is when the ovaries swell, which can range from severe pain to life threatening fluid problems (rare). Multiple gestation can be twins, triplets or more.

The pills of Step II can be replaced by another injectable hormone. The injection, given multiple times, causes egg development. This process is monitored with blood tests and ultrasound measurements of the growing ovarian cysts. Each cyst has an egg in it. At the right time, based on the blood estrogen level and the number of and size of the ovarian cysts, the other injectable hormone is given to trigger ovulation, just like in Step II. Intercourse or insemination then follows. The chance of OHSS and multiple gestation goes up with this treatment.

Sometimes, the treatment is a combination of Step II and Step IIIa. The pills, clomiphene or letrozole, are used WITH the multiple shots, to increase the stimulation of egg production. Timing the injection to trigger ovulation is the same as Step IIIa. Intercourse or insemination then follows. The chance of OHSS and multiples is similar to Step IIIa.

Insemination – With Any Step.

Insemination can be used in any of these cycles, but it is mostly used in Step III treatments. Insemination is especially important for those couples with a lower sperm count.

Steps I, II and III are used appropriately for couples in which all testing is normal. Specifically, the fallopian tubes need to be open, the sperm count needs to be high enough, and the woman needs to have “working” ovaries. There are couples who go directly to IVF, for example no open fallopian tube, too few sperm, donor egg, and donor sperm. IVF, in vitro fertilization is very similar to Step IIIa, up to the ovulation trigger shot. Then, instead of sex or insemination, multiple eggs are retrieved, and combined with sperm in the lab. The fertilized eggs are allowed to grow in the lab for a short time. The final step is to put one or two growing eggs into the uterus.

There is a process of preparing the uterus to accept and nurture a growing egg. The hormone preparation of the uterus is an important step in the process.

Intra Cytoplasmic Sperm Injection (ICSI) is the same as IVF, Step IV, until the sperm meets the egg. During IVF, the semen is prepared as if for insemination. The egg is then fertilized using the solution of MANY sperm. Fertilization occurs naturally, with a single sperm making its way into the egg, just like it would in the body. During ICSI, a single sperm is actually injected into the egg. The sperm is selected in the lab, based on shape, movement, and other factors. 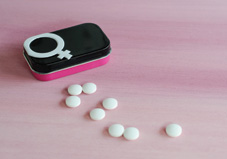 Not Just a Pill There are more ways to handle your contraceptive needs, learn more about your options...