Pregnant moms and obstetrical providers rely heavily on fetal movement for confirmation that everything is safe and healthy for the pregnancy. Some babies move all the time, so much so that a pregnant mom is persistently uncomfortable and may even have trouble sleeping. Other moms have difficulty feeling the baby move, even when other tests demonstrate a healthy baby growing and moving normally.

Fetal limb and body movement can be seen by an ultrasound as early as 11 or 12 weeks. At approximately 20-22 weeks most moms will begin to feel the baby move. In a second or third pregnancy, fetal movement is perceptible as early as 16 or 17 weeks.

After 30 weeks fetal movement should be predictable. If asked: “When did you last feel the baby move?” A pregnant woman should respond “Just a few minutes ago,” or “The baby has been moving as usual all day long.”

Kick counts are a tool for women who do not feel the baby move regularly after 30 weeks. (Before 30 weeks, moving here and there, now and again, is normal.  After 30 weeks babies must move regularly.) There are lots of ways to do kick counts, all of which work.  Here is one way, and what I recommend:

How To Do a Kick Count

We are looking for 10 movements in an hour. A movement is any tap, push or roll.

Have something to eat or drink: get some calories in you. Then, go sit down or lie down somewhere quiet. Do not listen to music, do not turn on the television, do not talk of the phone or surf the web. Just sit or lie down and feel the baby.

What To Do With the Count

As soon as you count ten movements in one hour, or less, you are done; the baby is fine. If you have fewer than ten movements in that hour, do another kick count after the next meal. If you just don’t feel the baby move in one hour, come to the hospital/clinic for evaluation. It’s important to call first to notify us that you are on your way.

If you do TWO kick counts in one day, and the baby moves fewer than ten times in each hour, CALL the office.

There are a number of tests available to prove baby well being in pregnancies marked by decreased fetal movement. Which test to use depends upon gestational age, and other pregnancy factors.

In some cases, a mom just can’t feel the baby move. In these pregnancies we do weekly NST testing, until the mom is sure the baby is moving regularly. Later in pregnancy, we may do the NST twice weekly. And we may measure the fluid level, AFI, and measure baby size to estimate growth. Low fluid, inadequate growth, or a bad fetal NST may be a reason to deliver the baby before the onset of normal labor. 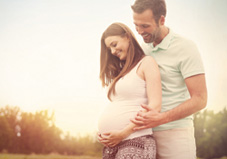